Showing posts from November, 2007
Show all

November 29, 2007
And Akshun J is pretty dang busy. Ridiculously busy, actually. Thus, the blog is a little slow right now. But don't worry! I'll fire off a few posts in December, and I'll be back on the blogroll come January.
Post a Comment
Read more

November 28, 2007
Remember that line from the Outer Limits? I was not a fan of the 60's series, but Showtime did it up right in the 90's with great writing and underpaid Canadian actresses that were willing to go topless. Yes, I'm just a tad intoxicated. But drunk or sober, I swear there's nothing better than scifi and boobies. For me, it began with Elvira on KHJ Channel-9 Sunday afternoons in Los Angeles in the 80's. Movie Macabre had two hours of campy sci-fi and horror, interspersed with comedy bits starring "The Hostess with the Most-ess." Observe her appearance on the Tonight Show, with a really young Jay Leno filling in for Johnny Carson. What was the point of this blog? I forget. Anyways, The New Outer Limits (on Showtime and later on SCIFI) is being released on DVD, slowly but surely. Netflix has got it, as well as Amazon if you want to purchase. This was the most cutting edge sci-fi on TV for about eight years. No sh*t. It tackled social issues head-
Post a Comment
Read more 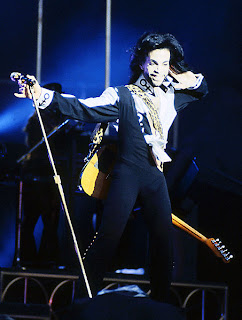 In this corner, the challenger, weighing in at 105lbs and standing 5'2" in his Cuban heels, the front-man for The Family, The New Power Generation, and The Revolution, the only man to take an unpronouceable symbol as his stage name, the man who only wants your extra time and your uh uh uh uh uh kiss, PRINCE Rogers Nelson! And in this corner, wielding multiple high-capacity servers with more internet bandwidth than they know what to do with, the Swedish torrent-website that publicly flipped the bird to the collective American entertainment industry, with a litigation record of 5-0, the reigning heavyweight champion of filesharing, THE PIRATE BAY! DING! DING! "Continuing an aggressive campaign to defend his copyrights, pop star Prince is preparing to file lawsuits in three countries--including the United States--against The Pirate Bay, CNET News.com has learned." I love both Prince AND The Pirate Bay, so this is particularly fascinating for me to watch. My first impu
Post a Comment
Read more 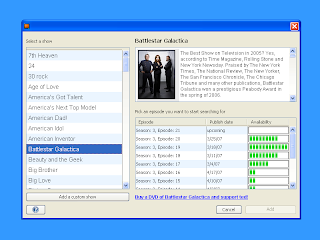 As an avid TV-show broadcatcher who doesn't own a single actual television, I'm always looking to tighten up the process. I use an old PC as my server ($20 from SWAP for a 600Mhz Compaq with 384MB of RAM) and a light version of Linux to keep things snappy and responsive. Therein lies my problem. The most popular broadcatching software is not exactly made for old hardware. Azureus is an awesome swiss army knife of a program, but on my old server it's a HOG! After about 4 or 5 weeks of continuous use, RAM and swap memory run out and Azureus actually comes close to crashing the whole system. So, this evening I began my hunt for a low-resource alternative. I ended up with a two-program solution. The first is TED, the torrent episode downloader . Unlike most RSS readers, it is specifically designed for broadcatching TV shows. Written in Java, it's cross-platform, easy to use, and feature-rich. TED grabs the torrents as they become available, and then hands them of
Post a Comment
Read more

So, the gPhone is really an ANDROID

November 08, 2007
I think it's a smart strategy. Instead of releasing a single, branded gPhone, the plan seems to be to get mobile carriers to release phones that run Google's Android platform . That's seriously clever. You end up with hundreds of gPhones, and an open platform for developers to create neat applications . Apparently Sprint/Nextel and T-Mobile have already signed up . AT&T has been iPhoned, so count them out. That leaves Verizon. I have a love-hate relationship with the "Can you hear me now?" company. On the one hand, they have phenomenal customer service, they usually have the latest and greatest phones, and I can actually understand my bill. But on the flipside, they are ridiculously expensive and their phones are all locked down with the same proprietary " Brew " software. I doubt Verizon will sign on to the Open Handset Alliance , but if they do, the ENTIRE game will change.
Post a Comment
Read more

November 02, 2007
Please, please, please watch this. If for no other reason than it's really funny to watch white people with no rhythm try to rap. I laughed out loud.
Post a Comment
Read more
More posts