Showing posts from April, 2008
Show all

April 30, 2008
So stop me if you've heard this one. A werewolf, a vampire, and a ghost all walk into a pub... Sound like a joke? Well, it's not. In fact, it is the basis for a new British TV series called, "Being Human". The pilot aired a few months ago on BBC3. I saw the pilot floating around usenet and on a whim decided to give it a watch. And this was truly a whim, let me tell ya. When I read the synopsis , " Being Human was a 2008 British television drama/horror, shown on BBC Three . Its pilot episode starred Guy Flanagan , Andrea Riseborough , Russell Tovey and also featured Adrian Lester . The programme concerned three twenty-something characters trying to live a normal social life, despite being a vampire, a ghost and a werewolf." I almost decided to pass. It was the phenomenal review comments that made me click the download button. Expecting the worst, I was absolutely floored after the first five minutes of a howling, screaming, utterly painful-lo
Post a Comment
Read more

The Neo is coming 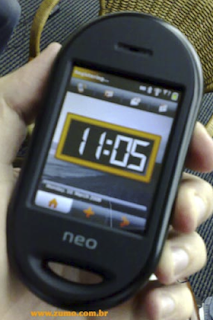 After much delay, the first open source phone is about to be released. It's the Neo FreeRunner ! Picture the iPhone, but with an open developer API enabling a PLETHORA of 3rd party apps! No, that's not quite right because it has a bunch of features that iPhone owners only wish they had. True 3G data speeds, wireless-N wi-fi, built-in GPS, Micro-SD expansion and a 400Mhz processor! Only $400 and available at the end of THIS month. I'll tell you who's about to have one...
Post a Comment
Read more

April 17, 2008
I had a little time this past weekend, so I decided to test out the Netflix's movie streaming service . Yes, in this day of ginormous HDTV and Bluray DVD's, I am perfectly willing to stream in 480p (standard def) to my 15" laptop screen. First up, was Justice League: The New Frontier . Bruce Timm, the genius behind Justice League and Justice League: Unlimited decided to dish up a period piece set in the 1950's. As an avid comic superhero fan, I've got to say that it was too cool to see the Silver Age versions of Superman, Wonder Woman, and Batman. But, as sci-fi and fantasy often does, it focused much more on social relevancy than on the wonders of having super powers. In fact, the story opens with Hal Jordan (the Green Lantern) flying a combat mission over North Korea. Conscious of the pro-propaganda nature of that decade, it presented traditionally pro-American themes in a very different light. For example, Wonder Woman is in Cambodia freeing enslaved
Post a Comment
Read more

And that's all she wrote

April 14, 2008
Ladies and Gentlemen, this concludes my experimentation with online data storage. My experience has totally and completely sucked. After spending the better part of two days uploading my music, I find out that JungleDisk doesn't actually do "streaming." When I try to play a song that I have stored remotely, JungleDisk actually connects to the Amazon S3 and *downloads* the complete song and caches it on my local harddrive. Then it plays. My local harddrive's cache size is about 5GB. My entire music collection was maybe 9GB. Let me paint this picture. I uploaded my music collection to JungleDisk/Amazon so I could stream it from anywhere and reclaim some local disk space on my aging laptop. But when I connect to play music, it downloads the entire music collection again! That's the stupidest thing I've ever heard! I wanted to *stream* my music on-demand. If I wanted to copy something, then I would copy it. The point is NOT to use my local hardd
Post a Comment
Read more

April 12, 2008
That data backup took an ENTIRE 48 hours to complete! Things are all fine and dandy now that everything is parked remotely, but daaaaaaamn it took a long time. Unless you've got a TON of upload bandwidth (at least 2Mb's) I would pass on the online data storage option. The cart is truly ahead of the horse on this one...
Post a Comment
Read more

Online data storage is a pain

April 08, 2008
Recently, I decided to give JungleDisk (powered by Amazon's S3 service) a test-drive. JungleDisk provides a toolkit for online data storage. Basically, I can store a bunch of stuff (music, docs, videos, etc.) remotely on Amazon's servers instead of my own local harddrives. The benefits include safe and super-reliable access to my data from wherever I am, at any time. I was thinking what a cool idea it would be to store all my music there , so I could stream it from any computer. In fact, I think storing things like pictures and music on local harddrives is a total waste. For the most part, this media just sits around on a harddrive doing nothing. Perhaps you occasionally search it for that wedding photo your mom wants to see. And then, at some point, the harddrive fails for some reason or another. Then you're really screwed. Online data solutions, on the other hand, have backups for their backups. And streaming pics or music is just fine for me. As long as i
Post a Comment
Read more
More posts