Showing posts from January, 2008
Show all

January 31, 2008
Steve Jobs serves up a pile of steaming crap to his fans, and guess what they do? Get in line for seconds. Apple TV has apparently jumped on the streaming movie rental bandwagon. Except that "Once you’ve started watching a movie, you have 24 hours to finish it or it self-destructs. And it does the same if you don’t watch it within 30 days." As I was reading this article to my wife she laughed and said, "What are they scared will happen?!" Indeed. What ARE they scared of? I can rent a movie from Blockbuster, rip it, and burn copies whenever I want. Ripping the poorer quality streamed copy from the "sealed white box" Apple TV gives me more hurdles to traverse for a less than desirable outcome. From a pirate perspective, that is. And yet, I'm sure loyal Apple fanboys and girls will stay up all night with glasses of champagne in hand, waiting for their Apple TV firmware to update so they can pay $5 for a movie they've got 24 hours to watch.
Post a Comment
Read more 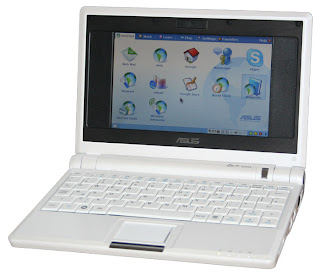 So I finally got my hands on one of those Asus Eee PC's today. Weighing in at a whopping 2lbs, with a 6" screen, a solid-state flash drive, low-voltage Celeron processor and 512MB Ram, this thing is a bargain at $299. And did I mention that it runs Linux? I have to admit that I was skeptical about the Eee after watching the Linux fanboy stampede. You could install Linux on a microwave and those guys would go nuts. I figured that with a weak processor and limited memory, it would only be an exercise in frustration. Was I ever wrong! I got to play with the Eee for three hours today and I was really impressed. It's designed to be sort of a small web browsing appliance, not an all-purpose PC. Thus the UI is very basic and task-oriented. You just click a button to "browse the web" or "make a call with Skype". The built-in wi-fi works reliably, the system boots lightning fast, and if you really want to use it as a true linux system with a full KDE
Post a Comment
Read more

I knew they had something cooking

January 28, 2008
These Brits are about to bury they're competition : "As of today, you can play full-length tracks and entire albums for free on the Last.fm website. Something we’ve wanted for years—for people who visit Last.fm to be able to play any track for free—is now possible. With the support of the folks behind EMI, Sony BMG, Universal and Warner—and the artists they work with—plus thousands of independent artists and labels, we’ve made the biggest legal collection of music available to play online for free, the way we believe it should be. Full-length tracks are now available in the US, UK, and Germany, and we’re hard at work broadening our coverage into other countries. During this initial public beta period, each track can be played up to 3 times for free before a notice appears telling you about our upcoming subscription service. The soon-to-be announced subscription service will give you unlimited plays and some other useful things. We’re also working on bringing full-length tra
Post a Comment
Read more

When did THIS start?

January 24, 2008
The recent unpleasantness began two months ago when my good buddy Wxman asked me to grab a copy of Queen's "We Will Rock You" for him. I jumped over to the much-lauded DRM-free (giggity!) Amazon.com MP3 store . Queen - Check. "We Will Rock You" - Check. Only $0.99 - Check. Emailed to Wxman - Check. Five minutes later, Wxman calls. "I don't know who the hell this is, but that's NOT Freddie Mercury." Hmmm, something was rotten in the state of 70's classic rock. Two hours of searching and a Pirate Bay torrent later, I had Queen's Greatest Hits on my hard drive. Just to make sure Wxman wasn't yanking my chain, I played both tracks for my wife in a blind test. "Who the hell is that? And why can't he sing?" she asked of the Amazon.com track. After some research, it turns out that Amazon.com was not licensed to carry Queen's stuff, but they did have some "great" cover bands. Ho hum, I thought. Se
Post a Comment
Read more

January 19, 2008
Joost may be dying! And in the words of the immortal Captain James T. Kirk (in reference to the Klingons), "Let them die!" For the noobs, Joost was this cool new application that let you stream TV shows (full screen) to your computer. Real TV shows from real networks! Initially, I was a big fan as they openly used open source technology and pledged to have cross-platform (i.e. Linux) support. Unfortunately, weeks and later months passed, and no Linux client was ever released. And when I did try out the Windows client, I was SORELY disappointed. Since then, the Hulu's and Miro's of the world have arrived on the scene to eat Joost's lunch. And with the recent firing of their CTO, it appears Joost has even larger problems. NewTeeVee has a more in-depth story ...
Post a Comment
Read more

January 19, 2008
This little bit of Tron (and Tony Hawk) was part of a really endearing ad campaign popular on the SciFi Channel when it was hitting it's stride about 7 or 8 years ago. The year was 1999 and Farscape was the jewel in SciFi's crown, along with little gems like Lexx (damn, that chick was hot), The Invisible Man , and First Wave . And let's not forget Star Trek, The Outer Limits (new and old), and the Twilight Zone. It was a good few years for geeks on SciFi. And believe me, it didn't start out that way. The network started out running old episodes of Land of the Giants and G-Force. How far we had come! But by 2001, weird crap started to happen. SciFi sold off the rights to series' it had fought hard for. Star Trek went to TNT. And they cancelled Farscape, which was their number one money-maker at the time. By 2003, SciFi was all about it's self-made monster-of-the-week flicks, and all the good TV was just about gone. Why? Who knows? Personally, I
Post a Comment
Read more

Wake up and smell the proxy!

January 09, 2008
So, apparently, Hollywood has finally exerted enough pressure with the telecoms such that AT&T and it's brethren appear ready to cave in to their demands. According to the New York Times, " AT&T and Other ISPs May Be Getting Ready to Filter" ! Scandalous! That means any content that your ISP's filter deems to be "pirated" or "copyright" simply won't load in your web browser. So what's a downloader to do?! Absolutely nothing. No serious pirate worth their salt is downloading in the open anyway. Encrypted proxies (or VPN's for rent) are springing up all over the place. Giganews offers encrypted SSL downloads. Bittorrent client Azureus can similarly mask downloaded content, while also choosing to only download from others who similarly mask their content. All filtering is going to do is PISS OFF HONEST WEB SURFERS! When your favorite website is blocked because it is using a keyword that your ISP happens to be filterin
Post a Comment
Read more

January 05, 2008
Honest, I am!!! The holiday season is over, and very soon the blogging will continue. The weekend is near!
Post a Comment
Read more
More posts