My company is launching an entirely new business venture, and one of the test markets just happens to be.... you guessed it. Hotlanta! And I just found out that I get to be on the team!!! It worked out really well, as my wife just accepted a post-doctoral fellowship to the CDC. So, we've both got brand new adventures ahead of us! Cool, hey? (Ugh, I still sound like a Cheesehead. I wonder what I will sound like after a year in the ATL?) 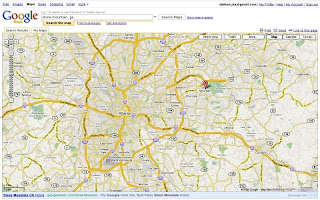 Click on the image to blow it up. Have I fessed up to being a Google-groupie??? Man, Google apps are like crack. You can't stop using them! Maps, Calendar, Email, Blogger, Documents, etc. And they've got a mobile version of EVERYTHING! And they support open source and linux. And they are launching an open cell phone O/S in the very near future. Wait, was this blog about me and Atlanta or Google? I forget. In any case, I'll be in the ATL in t-minus 30 days. In honor of Hotlanta, I present this fine Outkast video, Bombs over Baghdad:

Outkast - Bombs Over Baghdad
by hushhush112
Hmmm, I suppose a disclaimer is in order. Although I fully believe that Outkast is the greatest hip-hop group ever, and B.O.B. is one of their best tracks, this video ultimately disappoints. I'm not sure how hot chicks in maple-leaf pasties dancing on poles is relevant to the lyrics. Not that I have an issue with hot chicks, maple-leaves, pasties, or pole-dancing. It's just that I expected something a little more..... substantive. Ah, maybe it's an Atlanta thing...
Posted by Unknown at 7:12 PM No comments:

On to warmer climes

Well Cheeseheads, it's been real. Yeah, REAL COLD!!! (At least from November to May, that is, 'cause right now it's 90 degrees outside and I'm roasting like a pig on a spit.) I'm headed south to....... the South. Yeah, as a sidenote, I'm re-thinking this whole "anonymity" thing. I was paranoid about my employers finding out about my blog and raining wrath down upon me, but then I found out that they really embrace the whole social networking thing, as long as I don't really talk about them. So, I guess I really don't care anymore. I don't even use uncensored expletives in my blog, so I don't think I have much to worry about.

But, I waaaaay digress. Circumstances have changed in a really good way, and the wife and I are departing Milwaukee in the near future, bound for the ever-growing Atlanta megalopolis. Hmmmm, cheap property, more money, good public transportation, mild winters, and I get to live in a big city again. Not a tough decision, right? Actually it really was a difficult decision. We'll be hundreds of miles from our best friends Richmond, Wxman, and their wonderful kids, which will seriously suck. But our hand has been dealt and we've gotta play our cards. See ya, Wisconsin. You were a cold, bitter b*tch half of the time, but I really liked you the rest of the time. Peace out.

Needless to say, my blog updates will be pretty irregular for the next 90 days or so. But who knows? I have a laptop, and an aircard, and a new smartphone. I don't seriously think I have any excuses for not updating the blog, so keep watching this space. ATL, here we come!!!
Posted by Unknown at 12:55 PM No comments:

Well folks, I have finally decided on a new smartphone. But first, I'll expand a little on my quest. It began with the En-V, LG's Frankenstein monster of a cellphone. Candybar scheme on the outside, flippy full-keyboard and widescreen goodness on the inside. And for a few bucks more, I got the GPS add-on. Life was good for a while, but over time I began to discover what I really *wanted* out of a cellphone. Surprisingly, the voice/phone part was really a small part of it. I wanted a full qwerty keyboard for texting and IM, a decent camera, a good picture viewer, and a decent web browser so I could connect with Google mobile and view things like my calendar and email. Most of all, I needed a more robust platform so I could later add on programs depending on how my needs changed. What I needed was a smartphone.

As replacing the En-V was not an emergency, I took my time shopping around. Even though I was with Verizon, I was willing to break the deal and jump to another carrier if the phone was right. I looked at the Blackberry Curve, the iPhone, the Instinct, the Voyager, the Blackjack, and all the other usual suspects. Let me first say that the iPhone is a hot little number. The new 3G has integrated fixes for many of the complaints that people had about the Gen 1, and it is really a pleasure to play with. The functionality and intuitive nature of the UI is second to none. But a couple of things killed it for me. $200 and two years in bed with AT&T?! Yeah, right. But more importantly for me, it is Apple's outright hostility towards the hacker community that is a deal-breaker. I'll rant more about this later. Anyways, the other phones like the Voyager and Instinct were just iPhone knockoffs in my opinion. Poorly implemented touch screens, varying levels of unresponsiveness, yadda yadda. The only two that held my attention based on my needs, were the Blackberry and the Centro. Part of me wanted to just wait for the FreeRunner or the first phone with Google's Android platform, but all at once my phone situation suddenly became urgent. I had dropped and severely damaged my En-V.

So, I drove to my local Big Box and test drove the Centro for a bit.

Oooooo, it was a cool, refreshing blast of pure Palm. It has an excellent touchscreen, proven and reliable apps for things like pdf's or Word documents, and a really slick Google Maps application! Who cares that it's ultimately a legacy device? When Palm decides not to support it anymore, the Centro's not going to vanish in a puff of smoke. And the software developers might well continue to update their wares, with or without Palm's blessing. However, my gut tells me that the recent breakout success of the Centro just might be making Palm rethink their long-term plans for the O/S. In short, the Blackberry never had a chance. Centro had me at hello.

After 48 hours of playing with it, I'm a pretty happy consumer. I did a dead-easy hotsync with my contacts backed up from my En-V on my linux desktop. Then I installed the newest Google Maps (complete with the new "my location" feature), a PDF reader, Facebook, and Solitaire. I can easily access my Google Calendar from the built-in web browser (which also renders other mobile pages very well including Youtube). And a surprise bonus is that I can retrieve my corporate email using Palm's Versamail application. My only complaint at this point is the battery-life. I almost didn't make it through a full day. But I'm sure I can cure that problem with a high capacity battery.
Posted by Unknown at 11:46 AM No comments:

Getting the Flock out of here

Sadly, after a couple of weeks using Flock, I have to say I'm not too impressed. Sure it's nice to have a media bar at the top with your chosen Picasa or Flickr pics. And yes, it's cool to see Facebook updates in realtime on a sidebar. 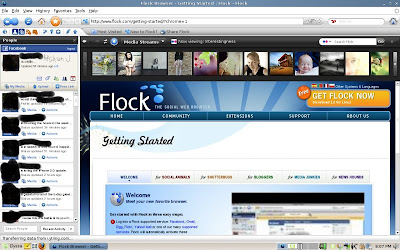 But when it comes to anything akin to real browsing, Flock fails. It's based on Firefox, but the experience only leaves you wanting for the real thing. In fact, I think it's overkill to design an entire browser to do some things that a few Firefox extensions could probably take care of. Too bad, as I thought it sounded like a cool idea. But over the course of two weeks, all I did was fire it up, watch the Facebook updates load, say, "Cool" and then load up Firefox to get my real browsing done.
Posted by Unknown at 9:03 PM No comments:

I just found out I'm the same age as Mark Shuttleworth, the creator of Ubuntu. He's also worth north of $500 million. I'm not. Damn.
Posted by Unknown at 8:20 PM No comments:

A Flock of what?

So, I'm experimenting with different web browsers these days.  Not that I'm unhappy with my default Firefox 3.  On the contrary, Firefox 3 is the BEST I've ever used (despite the occasional crashiness on Flash 10 sites).  No, the decision to experiment came when I saw an article on alternative browsers and how they have matured.   Opera, Epiphany, and the like.  Ho hum.  But then I saw Flock, the browser expressly designed for social networking.  Hmmm, as my life has recently become CONSUMED with the social network sites, I figured this must be a "good thing", so I decided to give it a spin.  And it's based on Firefox, so how bad could it be?

In fact, I'm blogging from within it right now.  And I have sidebars with Facebook, Picasa, and GMail updates.  It takes a little getting used to as the UI is quite a departure from Firefox, but it certainly enhances the "immediate gratification" effect.  It converts a "pull system", whereby I go to a website like Facebook and seek updates on what my friends are doing, to a "push" system that displays updates from those sites immediately after opening my browser.  Many would call this information overload, but we'll see.  I'll spend a week using it, and then report back.

UPDATE:
Hmmm, the spellcheck doesn't seem to work properly.  That could be a problem in light of my tendancy to blog while intoxicated.  Apologies in advance if the above text is a bit...... mangled.  :-)

Blogged with the Flock Browser
Posted by Unknown at 1:03 AM No comments:

This work is licensed under a Creative Commons Attribution-Noncommercial-Share Alike 3.0 United States License.