Showing posts from April, 2007
Show all

April 26, 2007
Many out there think that Youtube is the pinnacle of streaming video content. Without a doubt it is the most popular, but Youtube along with it's Google parent are rapidly being left in the dust with regard to content. Youtube suffers from it's own popularity in many ways. They're under pressure for keeping out copyrighted content, their maximum ratings are PG-13, and they really haven't updated their UI in a while as their resources have been focused on taking down those pesky NBC clips. While Google/Youtube takes the heat, other streaming video sites have risen and developed under the radar. My current favorite, Dailymotion , is based in France and they honestly seem like they could give a sh*t about American copyrights. Nor do they seem to care about content ratings (excluding hardcore stuff). Even better is that guys like Youtvpc are using Dailymotion as a content server, and putting up a website to pipeline that content to viewers on-demand. TV shows, bo
Post a Comment
Read more

Joost is coming, but is it ready?

April 23, 2007
Well, I finally dusted off the Windows XP partition of my laptop and decided to install Joost and try it out. Apparently CBS has just signed some content deal with them, and I'm sure the other networks aren't far behind. For those who don't know, Joost is a new platform for streaming TV content straight to your computer. And for the social networkers out there, there's also some sort of IM client that lets you chat with fellow viewers. Right now the channels are pretty limited. MTV, National Geographic, Comedy Central, and a bunch of indie stuff. So what did I think of it? Well, first of all, the installer began by cheerfully telling me that my aging Thinkpad T40's video card was not quite up to snuff. AND that 512MB of RAM is really the bare minimum. Hmmm, that would mean there's some 3D jiggery-pokery going on. Nevertheless, it installed and fired up. 30 seconds later, Joost loads full screen with some floating crystals on the side (their logo), an
Post a Comment
Read more

April 21, 2007
Allow me to rant for a moment, in a similar vein to my good buddy Richmond over on her blog a few days ago. Whenever some lunatic shoots up a school, the "family values" lobby comes pouring out of the woodwork to start blaming violent movies. I knew it was a matter of time. From the article : "Cho’s video and photos were lifted from movies. The two gun pose, arms spread, straight out of Boondock Saints, or Snatch, or Layer Cake, or The Transporter, or any number of mainstream action movies. The hammer pose, straight out of Oldboy. In a very disturbing way, Cho was doing what the movies told him to do." What the movies told him to do?! I am usually a fan of the guys over at NewTeeVee , but on this issue, I SERIOUSLY part ways with the author. My comment, in case you don't end up reading the article: "This article misses the point COMPLETELY. Sociopathic killers have ALWAYS been addicted to the fame. Reference Jack the Ripper and work your way forwar
Post a Comment
Read more

April 16, 2007
We're getting closer and closer. Bandwidth and servers are still major bottlenecks. Unless you're Google, you don't have server farms able to handle the traffic, and residential ISP's still don't offer much above 3MB/sec. But, content providers are banking that this will change, and a few of them are staying ahead of the curve. First up is Netflix . I was DEFINITELY an early adopter with this company. I remember walking into Blockbuster a few years ago trying to find some movie or another, and realizing that my efforts were futile. Blockbuster's focus was new releases, most of which it couldn't keep in stock. Any other movies were purely hit and miss. But then I discovered Netflix, and I was introduced to the Long Tail of the Market . Obscure movies or TV shows, Netflix had 'em. New releases, Netflix had 'em (albeit with some waiting involved). Indie movies, you guessed it! And over the years, Netflix has grown monstrously, cutting deepl
Post a Comment
Read more

April 09, 2007
So, I guess Imus has been suspended now. 'Bout damn time. Nappy-headed hoes?! In 2007?! And he's saying this in New York? Time to check himself, 'cause he's definitely wrecked himself... UPDATE: The civil libertarian within me feels compelled to elaborate on my above statements. Imus clearly should have the right to say whatever the hell he wants to say, regardless of how offensive. And the public has a right to tell Imus to shut the f*ck up, and to tell his media bosses to sh*t-can him. Rosie O'Donnell is in the same position. It's troubling to hear the right-wingers try and defend Imus (simply because Sharpton is involved), especially since they used the same tactics to sh*t-can Bill Maher and the Dixie Chicks. It's equally troubling to hear the left-wingers who hate Imus and want to see him fired, conveniently forget to trot out the ole 1st amendment like they did when Rosie's job was threatened. Where do I sit? Let the market decide.
Post a Comment
Read more 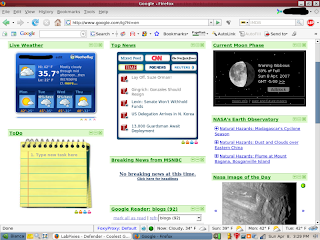 For those of you just tuning in, I'm a confessed Google Groupie. Many think that Google, like Microsoft, is evil incarnate. Satan's winter home. The Devil's Spring Break. Succubi Gone Wild! Clearly I disagree. I don't even think Microsoft is evil. That status is reserved for Apple, Inc: The Antichrist. But that's a whole other rant. I think the anti-Google sentiment comes from the techie far-left that regards everything corporate as evil. (To clarify my own political views, I would probably best be classified as a weak libertarian. Small government, low taxes, don't legislate behavior, social liberal, economic conservative, fiscal discipline, yadda yadda. Watch Penn & Teller: Bullsh&t! for an explanation). In the economic ecosystem of capitalism, big corporations have a niche. History tells us that once they reach a certain size, their own bloat and inability to innovate forces them to collapse. There are few exceptions. Google embraces t
Post a Comment
Read more

Dell FINALLY comes to the table!

April 04, 2007
After two years of flip-flopping on the issue, Dell went to it's customers and asked the question. "Do you want Linux on your computer?" And apparently the answer was a resounding YES!!! Hmmm, people are tired of the Windows monopoly and maybe want to try something different on their computer? Or they're tired of viruses and spyware? Or they're tired of purchasing overpriced software because Windows comes with nothing except Media Player and Explorer? I've been off the Windows since September of 2002. Never looked back. But, then again, Linux isn't right for everyone either. There is definitely a learning curve if you're used to working with Windows. But my relief is finally seeing some competition in a market that has been stagnant for over a decade. The next step is for the Gateways and HP's to follow-suit. Then we'll be making progress...
Post a Comment
Read more

CEO of Dreamworks agrees with me...

April 01, 2007
Blu-Ray and HD-DVD are going to grab a niche market with the early adopters.......and that's it. Don't take MY word for it. Listen to Jeffrey Katzenberg, CEO of Dreamworks Animation: "Blu-Ray and HD DVD are a niche business. They're not going to become the next platform." See? It sounded just like him! Check out the article ...
Post a Comment
Read more
More posts