I love it when a girl gets messy!

September 16, 2007
"BUFFALO, New York (AP) -- When it comes to wolfing wings, Sonya Thomas is a whiz. The 105-pound competitive eater who goes by name "The Black Widow" bested a dozen beefy rivals Saturday night, scarfing 173 wings in 12 minutes to win the wing-eating contest at the National Buffalo Wing Festival."That's 5.17 pounds of wings," said Brian Kahle, spokesman for the annual Labor Day weekend event in the city where Buffalo wings were born. Thomas, 40, of Alexandria, Virginia, also held the festival's previous record of 161 wings in 12 minutes, set in 2004. "She's the crowd favorite," Kahle said. "It was 12 huge guys and her." Thomas has set numerous records in competitive eating events, including 37 hot dogs in 12 minutes; 35 bratwursts in 10 minutes; 11 pounds of cheesecake in 9 minutes; 44 lobsters in 12 minutes; and 250 Tater Tots in 5 minutes."

I think it's the string of saliva from the water-bottle to this chick's chin that really makes this photo precious. I love a woman who's not afraid to get a little messy with chicken wings. And yet I married a vegetarian. Hmmmm, I must think on this...

It looks like CNN removed this story, but here are some additional photos of the "Black Widow". She's awesome! 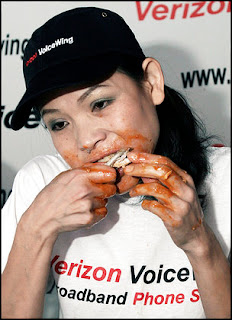 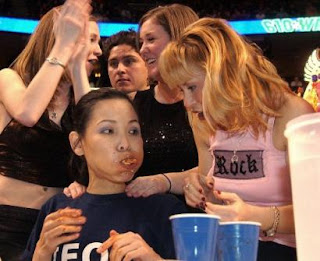