Oh, the joys of virtualization...

March 30, 2008
I'm sure the question on everyone's lips these days is, "Hey Akshun J, how do you linux users get around in the internet world without Windows?" Yep, I know you were thinking it. Well, as I said in a previous post, the last two years have been really good for linux users. We've got a SMOKIN web browser (Firefox), with a suite of cool plugins including Java and Flash. Instant messaging (Yahoo, Google, MSN, etc) is handled by either Pidgin or Kopete, either of which are darn good and handle all the major protocols. Music streaming is particularly robust with either Amarok or my current favorite Exaile. I can grab podcasts, stream radio, or listen to my music library all with the same program! All of this stuff gets me to the dance, and the steady stream of online browser-based apps like Facebook and Last.fm get me to the after-party. Did I mention that I paid exactly ZERO for all of these programs??? Paying for software is for suckas. It's all about the services, baby. Let me select the *free* app that I prefer to use, and then hit me up for a few bucks for the service. Data backup, MP3, what have you. I'll pay, but you can't get my money twice for the app AND the service. Ain't gonna happen. Check the technique: 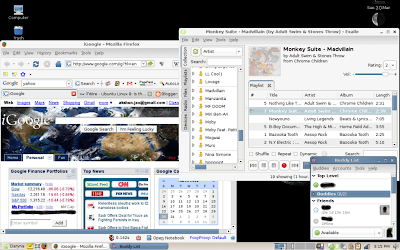 But once in a while, there is an app that *requires* Windows without exception. Sometimes this is a program I can live without, like Joost. Not only does it suck, but it has an awesome cross-platform alternative in Miro. Other times, it is a program that I *really* want to be able to run such as Netflix's online streaming service. It needs some wacky Active-X plugin that is ONLY supported by Internet Explorer. Ugh. If there is an ass-end of the internet, it is truly the piece of crap known as IE to loyal Microsofties. This plugin provides some DRM functionality and supposedly protects the content thus making the MPAA happy. It also leaves every Linux (and Mac) user out in the cold. As I love and support Netflix, I have decided to find a work-around. (Am I letting Netflix off the hook? A little. But the real *ssholes here are the MPAA for being so tight-fisted with their content. But that's another story.)

When I need a little Windows in my Linux world, I've got quite a few options. There's WINE, Qemu, KVM, Xen, Vmware, and VirtualBox. The current best of breed is without a doubt Vmware. It literally runs an entire guest operating system (Windows, for example) within *whatever* O/S you happen to be running at the time. Why run virtual Windows when I can just install the real thing? Well, outside of the fact that I love Linux, virtual Windows is my way of taming the beast. I can literally take a snapshot of the current Windows state and if things get unstable I just revert. Accidentally install a virus? No prob, just revert to a snapshot. For once, *I* get to control Windows, and not the other way around. But, as good as Vmware is, at $189 it's a little pricey for my taste. My preferred virtualization program is VirtualBox.

VirtualBox is free, fast, easy-to-install, has most of the same features as Vmware, and even includes a few killer features that are exclusive to VirtualBox. My favorite is the "seamless-mode". Basically it lets Windows apps seamlessly integrate with your Linux desktop. 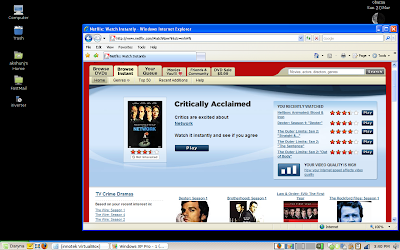 Yes, that is IE running the Netflix streaming app on my Linux desktop. That's the really sweet spot of open source. Free apps and cheap services. If you want to get started, bounce on over to virtualbox.org. And if you're a Windows user, try out VirtualBox to test the latest version of Linux. You might like what you see...
internet-radio joost last.fm linux miro virtualization windows