The Blackberry Strikes Back!

November 06, 2008
So there I was, standing at the very center of the Obama celebratory hurricane at a club called Sugar Hill in Atlanta's Underground. A couple of friends and I were crowded around a table, drinking cold light beer, talking about the electoral math, and watching Wolf Blitzer on a 300ft projection screen, along with about 150 other people. As the moment approached, you could feel the electricity in the air. When CNN would break for commercial, Earth Wind and Fire would crank through the speakers around us. Everyone was talking at once, sharing their personal stories about the significance of this election with complete strangers. It was awe-inspiring and beautiful. And as I tried to live-blog the event on my Palm Centro's TEENY TINY KEYBOARD, all I could think was, "I'm going to choke the life out of that Sprint rep for not getting me my demo Blackberry!!!" Needless to say, my blog entry was limited to a few emotional phrases, tersely typed using my frickin' pinkies.

Twenty-four hours after one of the most important events of a lifetime, I contemplated several personal resolutions.
I WILL volunteer my time to community-based initiatives that are important to me.
I WILL discuss politics more openly with those around me. Political discourse is what keeps democracy healthy.
I WILL use my abundance of technology to capture and immortalize more of the moments that are happening around me every day. Cameras, camcorders, laptops, and yes, my mobile phone.

The Centro failed me when I needed it most. It's camera is crappy quality and doesn't have a flash. And the keyboard.... Don't get me started again. 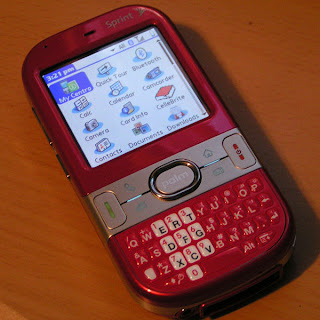 Look at those tiny, squashed-together keys! I thought I could overlook the keyboard when I first got it, but no more. I was mistyping every other word between live-blogging the Obama event and responding to my wife's instant messages. Now, I am *sure* that I need something different. Although I have recently blogged about the iPhone and Google's G1, these are still "leisure" phones, in my opinion. They are an attempt by non-traditional mobile phone companies to seize a certain "early-adopter" segment of the market. Their applications aren't always well-supported, and their respective manufacturers don't seem to mind releasing phones that are seriously buggy. What I need is a proven and reliable platform built to support a business customer, but enhanced with some of the niceties that create a satisfying leisure experience. I *think* I need a Blackberry.

Unlike Apple and Google, Research in Motion (RIM) just makes smart phones. It's literally ALL they do. And to their credit, they've been doing it well for the better part of a decade. Today, the Blackberry Curve and it's slimmer cousin, the Pearl are the workhorses of the smartphone industry. They are standard equipment at almost any company where employees require regular "on-the-run" access to email. RIM's strategy over the years has been pretty straightforward. Produce reliable smartphones, and dominate the business market. However, in reaction to Apple's recent encroachment on RIM's corporate busines, RIM has decided to play a strong offense and go after Apple's core iPhone market. And they think that their more stable and reliable platform, with all of the eyecandy on top, will be a recipe for success. I'm sure you're thinking, "Yeah right. A Blackberry that compares to the iPhone? Not likely." That's what I said, until I saw this:

Ladies and Gentlemen, I give you the Blackberry Storm, available soon from Verizon. All the strengths of the iPhone, and none of the weaknesses. Plus, it's still a Blackberry, so all of your corporate applications are still at your fingertips. And if that's too rich for your blood, or you need instant gratification, take a gander at the Curve's successor, the freshly released Blackberry Bold. 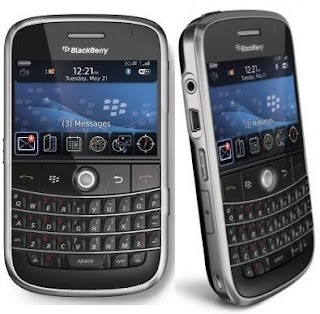 Even as the other handset manufacturers like Motorola, Nokia and Samsung are clamoring to produce Google-powered phones, RIM is continuing to directly challenge Apple while allying itself with no one. The real fighting should begin in earnest this spring. The mid-range Google phones, as well as the mighty G2, will begin to hit the market around May. But I'm sure *you're* not losing sleep over this. The smartphone wars don't scare you! Now that you've read my blog, surely you've figured out which phone is for you!

If I've left you all with anything, I hope it's the understanding that a certain design and marketing philosophy goes into each company's final product. This philosophy DRIVES the end-user experience to a far greater degree than a simple set of features like a touchscreen or a QWERTY keyboard. In six months, most smartphones will have the same features anyway, so these features are increasing irrelevant to your purchasing decision. The question you have to ask yourself is, based on the company's philosophy, what kind of an end-user experience will you get. If you're an early adopter who likes eye-candy, and a very consistent (albeit locked-down) experience, go for the iPhone. Early adopters who prefer to live closer to the edge and experiment with their phone should check out the G1 and soon to be released Google brethren. Or maybe you're like me. Not an early adopter at all. You want something that works reliably, is well supported, and has a proven track-record (as well as the eye-candy). Then you're firmly in Blackberry territory. Don't let a confusing market keep you on the tech sidelines. Sooner or later, you'll need a smartphone. So make sure you get one that fits YOUR needs, not necessarily one that your friends are currently raving about.

I hope this series was informative and interesting to everyone who read it!
Next time, I'll be talking about the new netbooks that will be hitting stores just before Christmas!
apple blackberry google gphone iphone smartphones