November 17, 2008
As many of you know, I am a big fan of last.fm. My fascination with the site began a couple of years ago. During my quest for new and interesting music, I stumbled upon last.fm. It billed itself as a music recommendation service, so I decided to give it a listen for a while. I was not initially impressed. It played some random but bearable music based on an artist I suggested (Prince, I think), but then quickly lapsed into heavy metal and then country, after which I promptly turned it off. Days later, I read that there were two ways for the audio scrobbler that powers last.fm to recommend music that I would like. Either I could listen to it's recommendations based on an artist, giving each song I heard a thumbs up or down, or I could let the scrobbler "listen" to my music collection. Basically, if I wanted to speed things up, I needed to play *my* music in my audio player of choice, along with a plugin that would feed that information to last.fm. After last.fm had collected enough data, it could play some stuff I would like. So, figuring that I would be a smart-ass, I decided to point my audio player at my ENTIRE music collection located on my home server, consisting of several *thousand* songs. I hit play, and went to work for 10 hours. And I continued to let it play after I went to bed that night. The next morning, I shut everything down and fired up last.fm. Suddenly, my formerly empty homepage was populated with all of the artists and titles from my basement collection. But I was still skeptical about the scrobbler's recommendation abilities. Until I launched the last.fm player. What I heard over the next few hours fundamentally changed my entire musical perspective and listening experience. No, I'm not kidding. I was re-introduced to the thriving world of underground hip-hop.

Until then, I thought underground had died with Jurassic 5 back in 1999. As a disciple of the underground scene during my teenage years in South L.A. at places like The Good Life, I had mourned the loss of good rap music.

But I was wrong. Underground was alive and kicking! Many would say it was THRIVING! Internet radio had helped to breath new life into it's fan base! No longer did I have to be subjected to repetitive "ridin' dirty" lyrics and mumbling, droning hooks. Now I got to listen to Mos Def, Talib Kweli, Aesop Rock, Murs, Atmosphere, Cannibal Ox, El P, Slow Suicide Stimulus, MF Doom, Smash Bros., and host of others. And then a really weird thing happened. I started BUYING music again. LEGALLY! From Amazon and Emusic. Musically speaking, I was fat and happy. That is, until a few months ago.

Over the summer, I began to notice some changes at last.fm. As a paying subscriber, I was able to create playlists out of my favorite tracks. It was an awesome feature when I wanted to hear a good mix of high quality tracks. At some point, this feature was crippled. Suddenly about half of my 150 song playlist was reduced to 30-second previews. And the last.fm radio seemed to be getting seriously repetitive, playing the same tracks from the same albums. User chatter on their forums seemed to point to some licensing agreements that had fallen through. But what really pisses me off is the fact that the powers-that-be at last.fm, to this day, haven't said a WORD to their PAYING users about what the hell is going on! Seriously, if I'm going to give you any of my hard-earned dollar, you can at least tell me that my listening experience is about to change. In the end, after two years, I have decided to let my membership with last.fm lapse. And I am giving the competition a little spin. 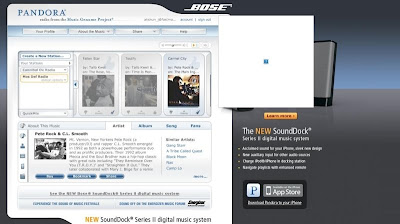 Pandora, for the uninitiated, is visually much simpler than last.fm. But that same spartan layout concerned me. Since there was no scrobbler to listen to my music library, I wondered how it would figure out my tastes. So, I went to pandora.com and here's what happened:

Hmmm, that guy could be a little less excited. Trust me, it's awesome. You're greeted by the site asking you for an artist you like. That's when the magic starts. Even obscure artists seem to have had their music broken down and defined for Pandora's recommendation engine. It literally knows what basic ELEMENTS define each artist, and matches those elements to other artists. It was so accurate that I listened my first night for HOURS! I am in music-love all over again! Pandora's my new home for underground beats. Give it a spin, and let me know what you think. Did I make a hasty decision with last.fm, or are you a Pandora groupie?
amazon.com emusic entertainment internet-radio last.fm multimedia music pandora streaming